With the Contisystem you can calculate rail first shots and easy Around solutions. Study it very carefully and pay special attention to the problematic zones and also the respective corrections. For beginners it is especially important to follow the instructions step by step in order to avoid confusion. First, you should manage the calculation to the third rail before you deal with the fourth rail, where you have to consider correction values. (From: “Faszination Dreiband-Billard”, Litho-Verlag, 2003)

The Numbers on the Rails

Prerequisites of the stroke

In order to eliminate the stroke as a possible source of error, it is necessary to gain a consistent stroke for using the system to solve patterns. This consistent stroke should have the following characteristics:

B 1 is hit slightly below center with much running English.

The speed should be chosen in a way that B 3 (for rail first shots B 2 and B 3) should at least be moved 40 cm from their position.

The stroke should be executed as standard stroke, meaning neither extremely smooth nor attacking. 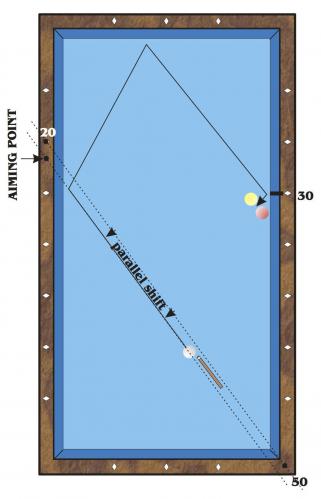 The path from third to fourth rail 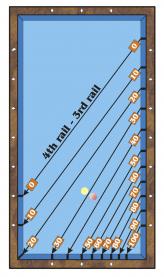 Correction of the path (depending on start values)

The path from the 3rd rail to the 4th rail is to some degree depending on the start value. This is called the correction of the paths. The numbers in brackets that you find below the start values show the respective correction value. 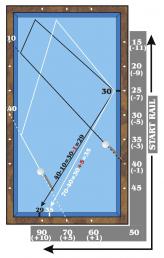 Be careful! The correction of the path only concerns the arrival on the 4th and not on the 3rd rail!

Before you start your practice unit or a game you should play the following four lines.

The actual arrival values on the 4th rail enable the player to integrate the characteristics of the table into his calculation.

Download our free catalogue for Mac and iOS with descriptions and excerpts from all English ebooks.